August 15, 2019Mike Whitehead, a veteran force on Canada’s national wheelchair rugby team, credits the community environment that sports can bring to one’s life as the key component in his successes both on and off the court.

(Canadian Paralympic Committee, Toronto) – Mike Whitehead, a veteran force on Canada’s national wheelchair rugby team, credits the community environment that sports can bring to one’s life as the key component in his successes both on and off the court.

Whitehead has been a mainstay on Team Canada for a long time. He has competed in the last five Paralympic Games (two silvers and one bronze), five world championships (1-1-2) and one Parapan Am Games (one gold).

The hard-hitting 43-year-old is still fit as a fiddle and will be an integral part of the Canadian team at the upcoming Parapan Am Games in Lima. His large, toned frame rolling throughout the court keeps the opposition honest.

Off the court, he is a gentle giant providing thoughtful insight into his personal story.

‘’It’s important to be involved and be around other people,’’ said Whitehead. ‘’If it’s sport even better. I know if I’m not showing up somewhere, because I’m not feeling good or something happens in my life, that somebody is going to call and say Mike ‘where have you been, we’ve missed you the last few weeks’.

‘’Hopefully that’s my opportunity to ask for help.’’

When he was battling alcoholism, Whitehead needed to ask for help. He was drinking and driving when he broke his neck in a car crash at age 24 which left him paralyzed.

‘’Sports bring a sense of community,’’ said Whitehead, originally from Windsor, Ont., and now residing in New Hampshire with his wife, daughter, and son.

‘’Playing wheelchair rugby alone has helped in my recovery from different adversities I have faced through the years. Just the physical aspect is like a meditation. And the sense of community hanging out with other people – we look after each other.’’

Needless to say, through his life battles and his wealth of experience as a wheelchair rugby player, Whitehead now plays a major leadership role on the team.

‘’I hope my teammates look at me as someone who leads by example and is a hard-working player,’’ he said. ‘’I take practice very seriously. I like to think the younger guys see a hard-working athlete who puts in the work at home and the court with enjoyment.

‘’We’re fortunate to represent our country and play a sport chasing a ball around. It’s every kid’s dream.’’

With all the versions of the national teams he has represented since the 1998 world championships, Whitehead is invigorated with the 2019 squad. For the first time in years, Team Canada is in a rebuilding situation towards Tokyo 2020.

‘’I think it’s fun,’’ he said. “New players bring an energy. They are eager and ready to learn and hardworking. Just the way I was when I was new. The guys and women are getting stronger, faster and smarter. The equipment keeps improving, the enhancement team – nutritionists, psychologists – is more knowledgeable, so it just elevates our game.’’ 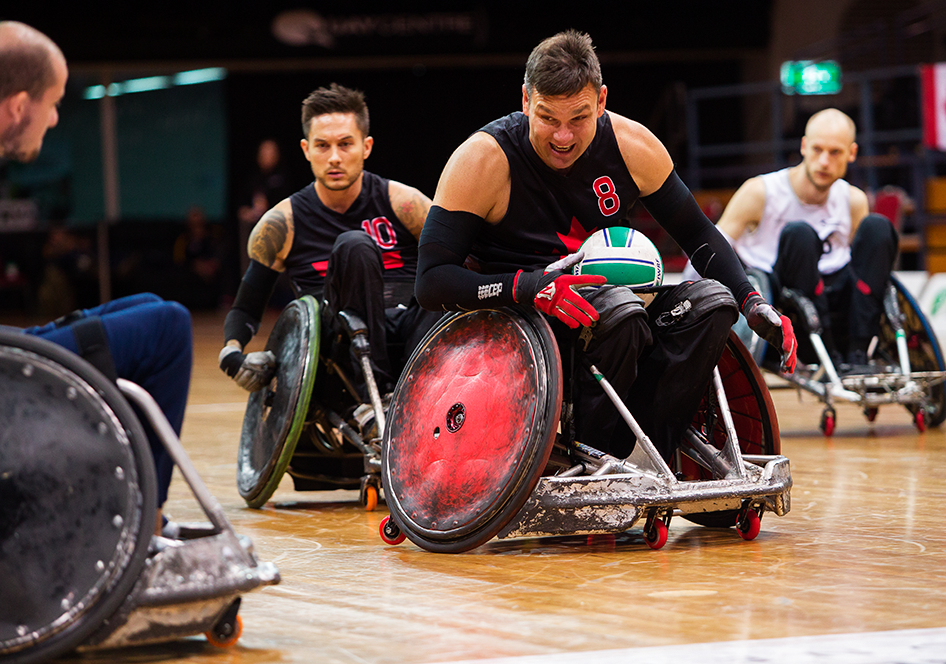 The next big challenge for Whitehead is the Parapan Am Games which start August 23 in Lima. Canada, ranked fifth in the world, can earn a direct ticket to Tokyo with a victory. If not, there’ll be a last chance qualifier early next year. He expects the U.S. and Brazil, currently ranked ahead of Canada at number two and three in the world, to be the biggest challengers.

‘’The world-class level is fast and aggressive, everyone is so smart,’’ said Whitehead, one of seven returnees from the 2015 Parapan Ams and 2016 Paralympics. ‘’You need to come in with a game plan, a back-up plan and know the adjustments that happen through a game to stay one step ahead. It’s amazing. When I look back at 2002 and 2003, our game plans appear rudimentary.’’

Whitehead wants to show he and his teammates have made big improvements since last year’s sixth-place finish at worlds.

‘’I learned after those worlds, I’m still really hungry and motivated to prove the Canadian wheelchair rugby team is still a top contender. I left there with a bad taste in my mouth.

‘’We’re accustomed to being in the top three teams in the world. It has motivated me to train harder.’’