DAY 3: CANADA QUALIFY FOR SEMIFINALS DESPITE NARROW LOSS TO USA

LIMA, PE. –Canada’s wheelchair rugby team recorded an emphatic 70-34 win against Chile and narrowly lost 54-51 to USA on Sunday at the Lima 2019 Parapan Am Games. The results mean Canada finishes second in the round robin and will now play Brazil in a semi-final on Monday night. 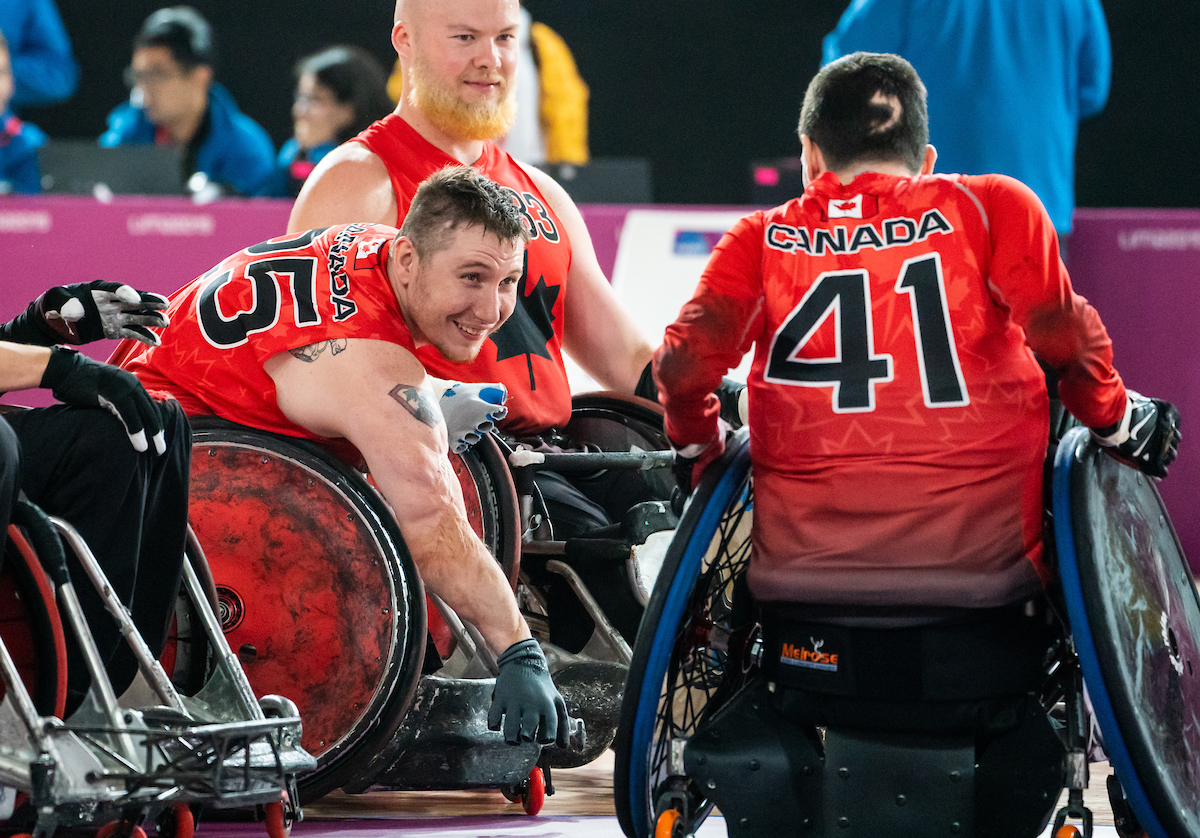 Quick starts have so far been key for Canada at Parapan American Games, which was again evident in their Sunday morning match against Chile.

The Canadians set the tone in the 1st quarter, by being decisive with the ball on offense and by pressing the Chileans high-up the court, while on defense. Canada’s effort would see them up by 14 tries, 19-5, by the end of the 1st.

The Canadians continued to pile on the pressure in the 2nd quarter, forcing a handful of turnovers to take a commanding 37-15 lead at halftime.

Perhaps with one eye on the evening matchup with the United States, Head Coach Patrick Côté made some changes to the team, in the second half. He ran different some different line-ups and gave an opportunity to some of the younger players to gain some experience.

The lineup changes would have no major impact on the flow of the match, however, as Canada would continue to outwork Chile and manage to further extend their lead in the third and fourth quarters. The match would end 70-34 for Canada.

Cody Caldwell (Athlete): “It was a good match. [Chile] played well. They’ve improved a lot since Toronto. They have a few new players. They have a bright future ahead but it’s nice to go get the win and now we can shift our focus to the United States this afternoon… The strong starts are always important. It sets the tempo for the game. It calms everything down and allows us to play our style of play for the rest of the match.”

Patrice Dagenais (Athlete): “It was a good game to prepare for the next one that we have this afternoon. The game will be at a good level. So far we’ve played four games and we’ve been fortunate enough to come on top for all four… We’re ready for our big match-up against the Americans which will be a very intense and emotional game I’m sure… Our team’s confidence is really high at the moment. We’re up 4-0 so far but we know our big game is against the Americans. We have a game plan we want to execute.”

David Willsie (Assistant Coach): “[The Canada versus US game] will be the first time we are tested as a team with the players we have here. We’re going to see how the team reacts on both sides of the ball. Chairs are going to be flying, tempers will be raised, and it’ll be a blast… We’re going to grab a quick bite to eat now. There’s isn’t a big turnover… only 3 hours until we face the Americans. Some quick massages and ice packs for the guys first. Then, let’s go get ‘em!” 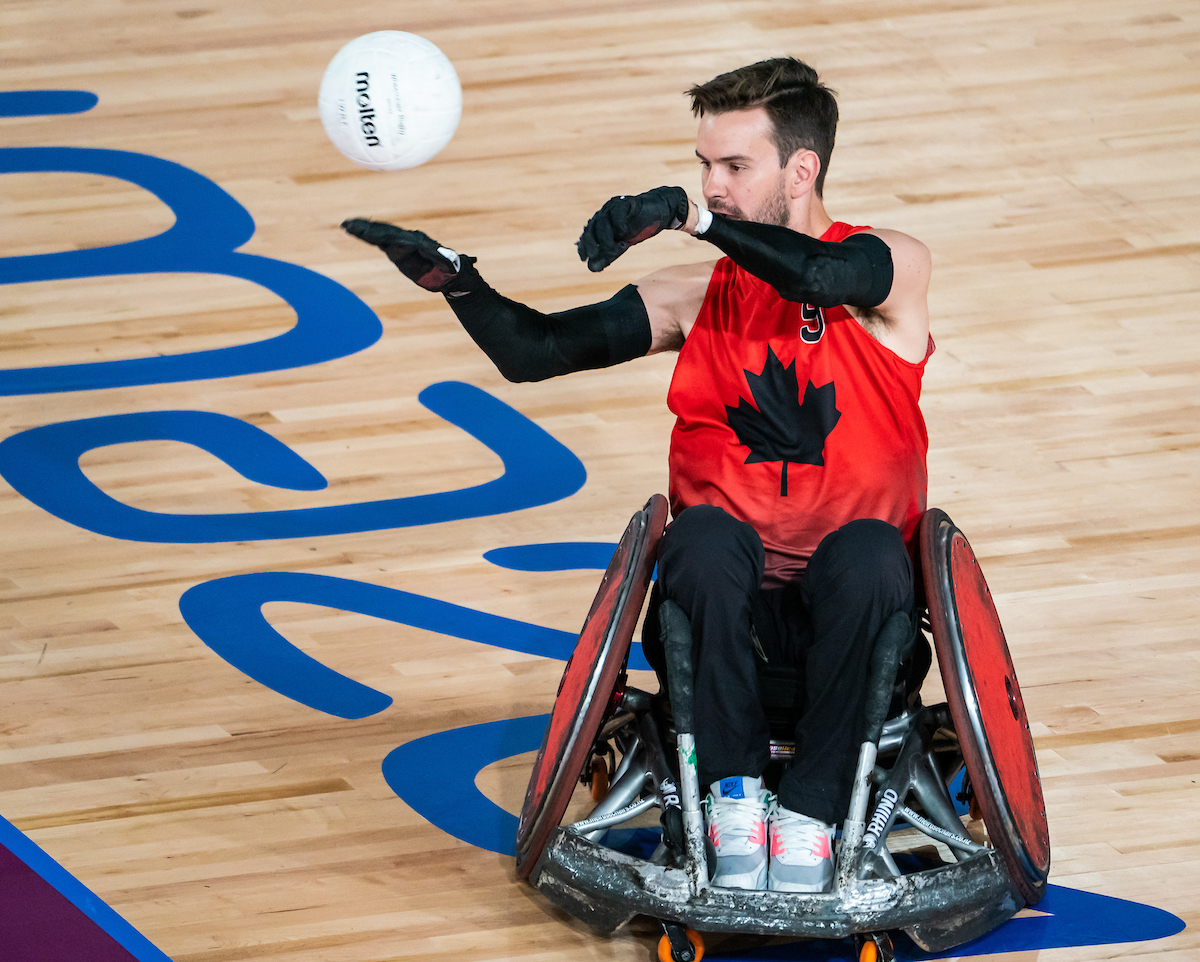 An old rivalry was reignited on Sunday night in Lima, Peru as Canada and USA squared off once again.

Both teams went into the match undefeated with 4-0 records, and both were already assured of a spot in the semi-finals. However, what was still up for grabs, was the chance to lock in the 1st place in standings.

It was also a chance for both teams to get one over their long-time rivals.

The match started very evenly, with the two teams going try for try in the first five minutes. Zak Madell, one of the tournaments best players so far, led the scoring for the Canadians, while Chuck Aoki racked up many tries for the Americans.

The first breakthrough would eventually come in favor of the Americans when a Madell had the ball striped right out of his arms. On the ensuing possession, USA would score and open a slender one-point lead. The first quarter would end Canada 13 USA 14.

The 2nd and 3rd quarters of the match would show why these two teams are the favorites of the tournament and likely to meet again in the gold medal match on Tuesday. Exchanging tries back and forth, with only the smallest of margins separating the two.

USA would take a slender one-point lead, going into the final quarter of the match. Canada needed to force USA into a mistake. Whether it be an interception, a fumble, a penalty turnover, Canada needed something to happen in that final quarter, in order to avoid defeat.

Try as they might, though, the Canadian side simply couldn’t get the better of the Americans, who managed to keep hold of the ball and see out the remainder of the match.

Trevor Hirschfield (Athlete) – “I thought it was a great game. We came out and played hard. There’s a couple things we could clean up before Brazil tomorrow and hopefully the USA again in the finals. A few ball-handling errors were made but they’re all fixable… We were very successful in the first game against Brazil so we will take that into the next game against them. We’ll hopefully take some of the things we learned in the first game against the US to the finals as well.”

Patrick Côté (Head Coach) – “It was a very solid game. The US are second team in the world right now. It’s the biggest rivalry in our sport so we always look forward to playing the US. We had a very good start. There were a few turnovers in the first quarter but we recovered well… I’m very proud of my team’s performance today, the energy they brought, and the way they applied the game plan. I think we are looking great for the match against the US in a few days… It was a three goal game and that was the difference there. I think we can take them.” 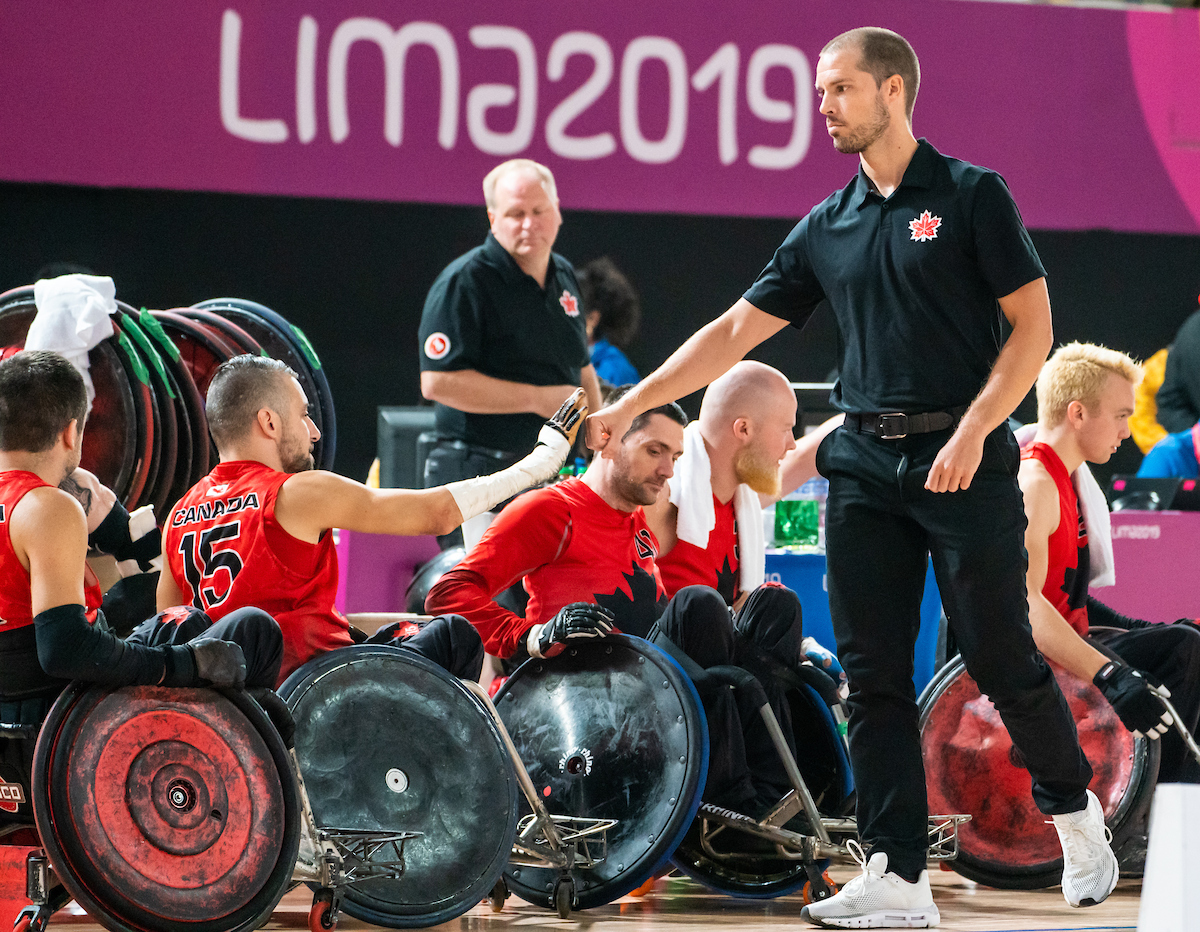 A semi-final with Brazil awaits Canada on Monday at the Lima 2019 Parapan American Games. The Brazilians, ranked 9th in the world, play a fast-paced, physical game of wheelchair rugby and have the assets needed to cause an upset.

Canada, however, will be confident going into the match. They’ve played well in each of their matches so far and managed to beat Brazil 58-43 in the round-robin stage of the competition.

A win for Canada on Monday, will see them play the winners of the other semi-final, between USA and Colombia, for the gold medal on Tuesday.